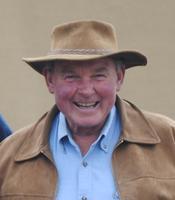 Terry Kelly stepped into his training career in 1982 pre-training horses for Noel Kelly and Ron Maund, and in 1984 he took out his training license.

Terry grew up with ponies and had a keen interest in horse racing with his grandparents who were race horse owners. It was friends David Ley, who was a publican and Reverend Father Michael Grady, who was well known in racing, that both influenced Terry to move into his thoroughbred training career. Prior to training Terry had worked as a diary farmer and had also worked with the company Alcoa Australia.

Since Terry has taken on the role of training he has gone from strength to strength, loving the industry and what he does. Terry, thrives on seeing his hard work with his horses result in a win and especially enjoys the camaraderie with the owners. He is described as a laid back and patient trainer that is 100% optimistic with his charges, working with the individual horses' needs and varying his training techniques accordingly.

"There needs to be a good foundation under every preparation and patience is the key." - Terry Kelly

Terry's career highlights include Royal Lakes winning the Devonport Cup in Tasmania, and the Gold Nugget Stakes in Ballarat. He also had multiple cup wins training the horse Aquiline. Terry won the Greys race at Flemington with a horse called Kammoora and has had success with many other horses such as; Jacques Le Naif, Frere Jacques, Arabian Poppi, Gladden, Lord Dresden, Space Cash, Esplaad, and Precious Poppi, just to name a few.

Today Terry has built up his stables and training facilities to a state of the art property with everything he needs, right down to the unique turf track with an uphill rise. Not many trainers have the options of such excellent training facilities at hand on their own property. This minimises the need for the added cost and time consuming transportation of horses. Prior to moving to his new training property Terry had stables at St Leonards on the beach on the Bellarine Peninsula.

The team at Terry Kelly Racing welcomes visitors to the property and Terry would be happy to speak with you. Terry is an approachable trainer with a positive outlook and leads by example.

He looks forward to continuing his enjoyable career in racing.